The Military and Hospitaller Order of Saint Lazarus of Jerusalem is an order of chivalry which originated in a leper hospital founded by Knights Hospitaller in 1098 by the crusaders of the Latin Kingdom of Jerusalem. The Order is one of the most ancient of the European orders of chivalry.

From its foundation in the 11th century, members of the Order were dedicated to two ideals: aid to those suffering from the disease of leprosy and the defense of the Christian faith.

The first mention of the Order of Saint Lazarus in surviving sources was in 1142. The order was initially founded as a leper hospital outside the city walls of Jerusalem, but hospitals were established all across the Holy Land dependant on the Jerusalem hospital, notably in Acre. It is unknown when the order became militarised but militarisation occurred before the end of the twelfth century due to the large numbers of Templars and Hospitallers sent to the leper hospitals to be treated. The order established ‘lazar houses’ across Europe to care for lepers, and was well supported by other military orders which compelled lazar brethren in their rule to join the order on contracting leprosy.

The Order of Saint Lazarus remained primarily a hospitaller order but it did take part in a number of battles including the Battle of La Forbie on 17 October 1244 where all of the lazar brethren who fought died and the Battle of Al Mansurah on 8-11 February 1250. The leper knights were protected by a number of able-bodied knights but in times of crisis the leper knights themselves would take up arms.

The Order of Saint Lazarus quickly abandoned their military activities after the fall of Acre in 1291 and the dissolution of the Templars due to expense, being a relatively poor order.

In 1154, King Louis VII of France gave the Order a property at Boigny near Orléans which was to become the headquarters of the Order outside of the Holy Land. Later, after the fall of Acre in 1291 the Knights of St. Lazarus left the Holy Land and moved first to Cyprus, then Sicily and finally back to Boigny which had been raised to a barony in 1288. In 1308 King Philip IV of France established the Order under his temporal protection. Again, in 1604 Henry IV of France declared protectorate of French Crown over the French branch and in 1608 the Order was merged in union with Order of Our Lady of Mount Carmel into Royal, Military,and Hospitaller Order of Our Lady of Mount Carmel and St. Lazarus of Jerusalem. During the French Revolution a decree of 30 July 1791 suppressed all royal and knightly orders. Another decree the following year confiscated all the Order's properties.[5] Louis, Count of Provence, Grand Master of the Order, who later became Louis XVIII, continued to function in exile[6]. Scholars differ in their views regarding the extent to which the Order remained intact after the French Revolution. King Louis XVIII, the Order's Protector, and the Duc de Châtre, the Order's Lieutenant-General, both died in 1824. These were followed by Charles X and Henry V as Protectors of the Order until 1830 but after this period the Order did not enjoy the protection of the French Crown until 2004 when the fons honorum ("fount of honour") was renewed by HRH Prince Henri d'Orléans, Count of Paris, Duke of France as head of the Royal House of France.

•Knight or Dame Grand Cross of the Order of St. Lazarus of Jerusalem (GCLJ) or (DGCLJ)

•Knight or Dame Commander of the Order of St. Lazarus of Jerusalem (KCLJ) or (DCLJ)

•Knight or Dame of the Order of St. Lazarus of Jerusalem (KLJ) or (DLJ)

•Commander of the Order of St. Lazarus of Jerusalem (CLJ)

•Officer of the Order of St. Lazarus of Jerusalem (OLJ)

•Member of the Order of St. Lazarus of Jerusalem (MLJ)

Gentlemen who are invested in the rank of Knight (KLJ) or higher are entitled to the pronominal Chevalier and women invested in the rank of Dame or higher are entitled to the pronominal Dame. Clergy may be admitted into the Order in one of the ranks as Assistant Chaplain, Chaplain, Senior Chaplain, Ecclesial Commander and Ecclesial Grand Cross. There is also a companionate which is often used to honour individuals who have supported the work of the Order or who have made a significant contribution to society.

For the Order's ceremonial occasions, such as investitures, the members wear distinctive vestments and insignia. The mantle of the Order is a black cloak with a green velvet collar and the cross of the Order sewn onto the left side. The mantle is always worn at religious ceremonies. In addition to the mantle and insignia members of the Order normally wear white gloves and ladies may also wear a mantilla in church.

A green button hole rosette may also be worn on a business suit by gentlemen of the Order. 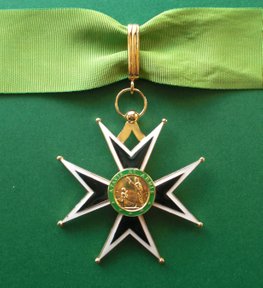 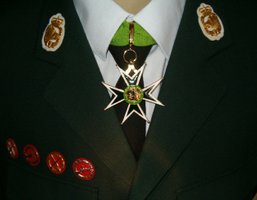 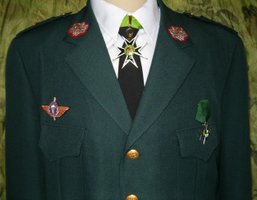 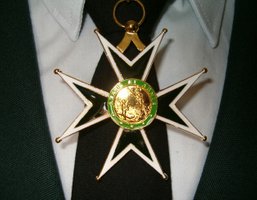