The decoration created by Leon XIII for the Holy Land Pilgrims

Visits to the Holy Places began, as Saint Jerome’s expression would have it, with the Ascension of Our Lord.

The pilgrimage movement was particularly strong toward the middle of the 19th century. Since then, in spite of the events that regularly shake the country, the faithful still come to the Holy Land on foot, by bike, in ships, by plane…

At the beginning of the 20th century, Leon XIII, who blessed and encouraged pilgrims in their undertaking, also wanted to give them evidence of his approval in a way that would also be a special, personal souvenir of their voyage. To this end, he instituted a religious medal or decoration by a decree dated May 2, 1901.

Decree of the Holy Congregation of Propaganda

In the midst of the cruel disquietudes to which the Church is subject in our time, Divine Providence, in its most bountiful counsel, takes care to provide the opportune remedy and, by its new growth, to give the faith unfailing vigor. It is not without reason that among the indices of this renewed growth of Christian piety, in recent times one notes a renaissance of zeal for venerating, one by one, by means of devout pilgrimages, the most holy places of Christianity. These religious manifestations are of particular character that is no longer isolated, but relates to numerous groups, taking place under the rules of a certain discipline that undertaken by these virtuous pilgrimages.

Chief among these sanctuaries, the Holy Places of Palestine impose themselves with a special force, these places that by his Incarnation, by the mysteries of his mortal life, by the bloody sacrifice of his death and by his glorious Resurrection, were sanctified by the only Son of God. It would be impossible, in fact, piously to visit these blessed Places without drawing from them an abundance of the fruits of salvation. In their regard is released a pious virtue that impresses itself upon hearts, revives to an extraordinary degree the sweetest memories of the Redemption of man, and gives birth to an irresistible desire to lead a way of life that conforms more closely to the examples and the holy teachings of Christ the Redeemer.

Moved by these motivations, the Sovereign Pontiff Leo XIII gloriously reigning, by virtue of his apostolic charge, embraces with attentive solicitude all those who belong to this growth of the religion, and resolves to encourage the salutary zeal that impels the undertaking of the voyage to Palestine. To this effect, by a decree, the execution of which he confided to the Holy Congregation of Propaganda, he instituted a decoration intended to perpetuate among the pious visitors to the Holy Land the memory and the fruits of their pilgrimage.

The decoration shall take the form of the cross referred to as the Cross of Jerusalem.

This is the manner in which it should be struck:

On the front, at the point of intersection of the arms, a small likeness of Leon XIII is sculpted with this inscription: LEO XIII CREAVIT ANNO MCM (Translation: Leon XIII created in 1900). In the crossbars are represented the mysteries of the Annunciation, the Nativity of Our Lord, his Baptism and the Eucharist; these words are read: CHRISTI AMOR CRUCIFIXI TRAXIT NOS (Translation: Christ’s love attracted us).

On the other side, in the center, is the image of the Risen Christ; In the crossbars: The Savior praying in the Garden of Gethsemane, flagellated, crowned with thorns and attached to the cross.

In the circumference: SIGNUM SACRI ITINERIS HIEROSOLYMITANI (Sign of the holy voyage of Jerusalem).

This insignia will be worn on the chest, on the left side. It will be suspended from a ribbon of red silk with four blue stripes in the middle; on the edges at each side will run a white band broken by a dark yellow bar.

These crosses will be in bronze, silver or gold. They will be awarded to each according to the rank he occupies in the world or in pilgrimage direction: one will also consider services rendered to the Holy Places. Two pilgrimages will give the right to a silver cross.

Conferment of the insignia belongs to the office of the Custos of the Holy Land resident at Jerusalem. It is he who presents it, with a certificate, in the name of the Sovereign Pontiff. The decoration will be given without ceremony to individual pilgrims, publicly and solemnly to large groups.

To be eligible, one must equip himself with a certificate from his parish pastor, endorsed by the Ordinary. The certificate should attest to the morality of the candidate and affirm that it was a pious motive that led him to undertake his voyage.

One should further remit to the hands of the Father Custos the sum of ten francs for the maintenance of the Holy Places, in addition to the price of the cross.

This decoration may not be worn except in religious solemnities, processions or pilgrimages, or in the presence of the Sovereign Pontiff.

By mandate of His Holiness, this present decree is to be signed, despite any contrary disposition.

• Given at Rome, in the Palace of the Holy Congregation of Propaganda

By mandate of His Holiness, this present decree is to be signed, despite any contrary disposition. Given at Rome, in the Palace of the Holy Congregation of Propaganda, on the second day of May 1901.

Desirous of augmenting the number of pious pilgrimages that, with such great profit for souls, the faithful accomplish to the sanctuaries of the Holy Land, the Sovereign Pontiff has deigned to institute a special medal or commemorative cross that will be given exclusively to pilgrims to Palestine, both men and women.

It is to your Reverence that the distribution is confided. Enclosed herewith I send you the decree of institution of this pious insignia, as well as the rules relative to its award and the certificate that it incorporates.

I send you, as well, one such medal, conformant to the model approved by His Holiness, as well as a copy of the catalogue of prices established by the goldsmith who executed the decoration and preserved the die.

Finally, every year, Your Reverence will be so kind as to address to the undersigned Congregation a report of the amount of alms that the distribution of these medals will have caused for the Holy Land, as well as of the number of pilgrims who received it.

In conclusion, I pray the Lord to guard you and to accord you all kinds of felicity.

Your most devoted servant, 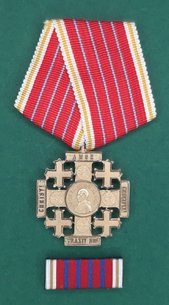 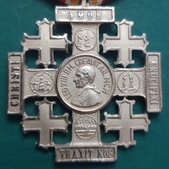 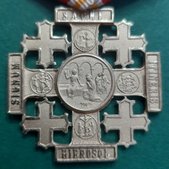