The Holy Military Order of Saint Adrian and Saint Sebastian

The Holy Military Order of St. Adrian and St. Sebastian is an international ecumenical Military Christian Order of Men and Women who have served in the Military. The Order exists to further the spiritual life and growth of each member, to pursue philanthropic and charitable works, and to promote a Code of Chivalry and Knighthood for the betterment of all.

It is a new Military Order of Chivalry, practicing those worthy Military chivalric traditions of ancient origin such as duty, devotion, honesty, compassion and charity. The Order strives to uplift and strengthen our local communities through right action.

The Spiritual Patron of the Order is Saint Adrian and Saint Sebastian, (Patron Saints of Soldiers) 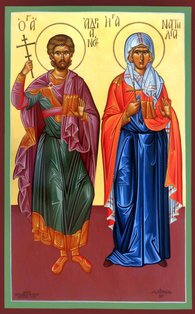 According to legend he was a pagan officer at the imperial court of Nicomedia. Impress by the courage of a group Christians who were being tortured, he declared himself a Christian and was imprisoned with them and suffered excruciating tortures before he was put to death.

His young wife, Natalia, who was present at his death (she bribed her way into the prison), comforted him in his agony, recovered one of his severed hands, and took it to Argyropolis near Constantinople, where she fled to escape the importunities of an imperial official of Nicomedia who wanted to marry her.

She died there peacefully.

According to his legend, he was born at Narbonne, Gaul, became a soldier in the Roman army at Rome in about 283, and encourage Marcellian and Marcus, under sentence of death, to remain firm in their faith. Sebastian made numerous converts, among them the master of the rolls, Nicostratus, who was in charge of prisoners, and his wife, Zoe, a deaf mute whom he cured, the jailer Claudius Chromatius, prefect of Rome, whom he cured of gout, and his son Tiburtius. Chromatius set the prisoners free, freed his slaves, and resigned as prefect. Sebastian was named captain in the praetorian guards by Emperor Diocletian, as did Emperor Maximian when Diocletian went to the East, neither knowing that Sebastian was a Christian. When it was discovered during Maximian’s persecution of the Christians that Sebastian was a Christian, he was ordered executed. He was shot with arrows and left for dead, but when the widow of St. Castulus went to recover his body, she found he was still alive and nursed him back to health. Soon after, Sebastian intercepted the Emperor, denounced him for his cruelty to Christians, and was beaten to death on the Emperor’s orders. That Sebastian was a martyr and was venerated at Milan as early as the time of St. Ambrose and was buried on the Appian Way is fact; all else is pious fiction dating back no earlier than the fifth century. 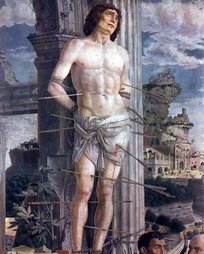 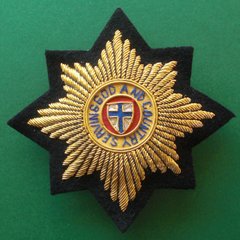